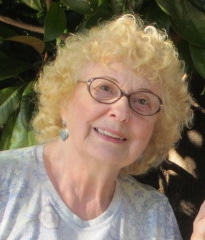 Barbara was born 31 January 1934 in Belmore, New York. She grew up as Barbara Louise Thayer in Baldwin, New York. She married William Cragg Howe and raised 4 children in Lindenhurst, NY. She was active in Girl and Boy Scouting programs and loved working with children.  She attended St John’s Lutheran Church in Lindenhurst and was well involved with the Mr. & Mrs. Club, Luther League and the Alter Guild.
After the passing of her husband Cragg she moved to  Powder Springs, Georgia. Mrs. Bongers remarried to Mr. Leonard Bongers for 22 years. The American Legion Auxiliary became her passion later in life. Barbara was a life member of the Order of  the Eastern Star.

Barbara’s family would like to thank her neighbors from Woodcliff Way in Powder Springs for the friendship and care they showed her. A memorial service will be held on Saturday, December 16th at 10:00 am at St. John’s Lutheran Church, Lindenhurst, NY. In lieu  of flowers donations can be sent to the American Legion Post 411, Islip, NY. The family is being assisted by Georgia Cremation 3570 Buford Highway, Suite 202, Duluth, GA 30096 (678)584-0914. Condolences may be shared at www.GeorgiaCremation.com