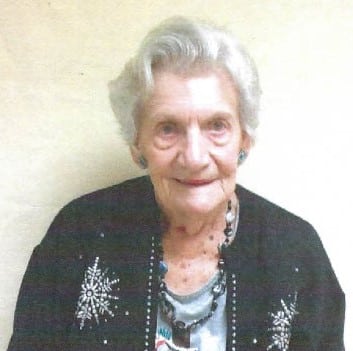 Barbara was born August 18, 1928, in Cleveland, GA., to the late James and Gladys (Nelms) Davidson. She grew up in Cleveland alongside her two brothers, four sisters, and her parents. Her dad was the editor, publisher, and reporter of a newspaper he had inherited, and her mother was a teacher and helped address the newspapers. Barbara graduated from Cleveland High School in 1946 and went on to attend Piedmont College in Demorest, GA.

While on a bus trip Barbara met the love of her life, James. The couple wed in April of 1951 and had two children. The family moved to Southwest Atlanta in 1955, after the birth of their son. In 1971 they moved to Senoia, GA. Where the family remained until James’ passing in 2008. Barbara and James were married for 57 years.

In lieu of flowers please make a donation in Barbara’s name to a charity of your choosing.

The Ivie family  is being assisted by Georgia Cremation, 1086 Hwy 54 W, Fayetteville. Messages of condolence may be left at www.GeorgiaCremation.com.