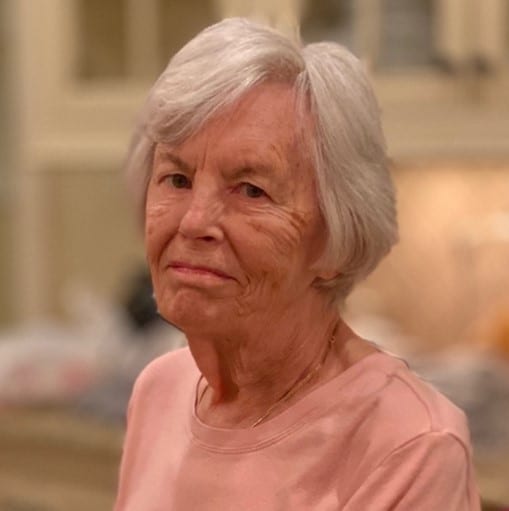 Christina Ann Donnolo passed away peacefully at her home in Alpharetta, Georgia on December 23, 2020. She was in the company of her son and daughter-in-law, and two granddaughters. Chris is survived by her brother, Paul George Johnson and his wife Priscilla Johnson of Cool, California, her son Mark Anthony Donnolo, his wife Blythe Agee Donnolo, and their daughters Isabel Grace Donnolo and Olivia Anne Donnolo of Alpharetta, Georgia. She was also like a mother to her younger cousins Richard Albert Senft and Ruth Senft Noyes.

Chris battled Inclusion Body Myositis for the last four years of her life and, through it, maintained a quiet strength, a strong will to live, a love of family and friends, and a wry sense of humor until her final days. She also was able to win more than her fair share of rummy games and ended her final match in a draw with her son Mark days before her passing.

Born Christina Ann Johnson on December 7, 1939 in Norwich, Connecticut, Chris was the daughter of George Ivar Johnson and Sara Helena Schelin Johnson and sister of Paul George Johnson. Chris spent her high school years living with her family in Brooklyn, Connecticut. She graduated from Killingly High School in 1957 and then moved to Hartford, Connecticut to become an administrative assistant for a major insurance company. She married Paul Raymond Donnolo in 1960 and they resided in East Hartford, Connecticut with their son.

Chris and her family moved to Chenango Bridge, New York in 1972 where she and Paul bought and ran two Dairy Queen restaurants for five years. In cloudy upstate New York, Chris and Paul found their love for flying airplanes, with their first bicentennial edition Mooney Executive single engine plane, and then decided to head for sunnier skies in Florida. They moved to Sarasota, Florida in 1977 and built a home in Bradenton, Florida, moving there in 1978.

Chris and Paul started and operated several businesses in Bradenton including Econo Pro Pest Services. They also started Eagle Flyers, the first flying club at Sarasota Bradenton International Airport and ran the club with six planes hosting numerous flying events in south Florida and the islands. Chris also ran for office on the airport authority of Sarasota Bradenton International Airport. Chris became a member of the American Business Women’s Association, traveled the country with her fellow members, and hosted fund raising events such as the ABWA Strut in Bradenton. After she retired and divorced from Paul, Chris moved to Alpharetta, Georgia to be with her granddaughters Isabel and Olivia as they grew up along with her son and daughter-in-law. As a grandma, her granddaughters described her as a “great” grandma. She was at every recital and school event and a big part of the girls’ lives. She had a new relationship of fifteen years with Brian Daniel Moroney who moved to join her from Syracuse, New York. Chris also worked part-time with Crossmark as a merchandiser, something she had wanted to try, which allowed her to continue to work with and connect with people, one of her passions. Throughout her life, Chris didn’t just say hello to someone. She naturally got to know them.

In retirement, Chris enjoyed life with friends and relatives and did a little traveling. She recently recalled two memorable trips. She made a surprise visit to London with her son Mark, where he walked her for days across the city in sun and rain. She never once complained about all the foot traffic, but enjoyed all the museums, pubs, and countless hours lost, trying to find their way through the side streets.

For years, Chris had wanted to take a cross-country train trip on a sleeper car. She also wanted to visit her brother Paul and his wife Pricilla in California one more time. For her 80th Birthday in December 2019, Chris and Mark flew from Atlanta to Chicago and had dinner at Shaw’s Crab House for her birthday evening. Then, the next day, boarded Amtrak’s California Zephyr for a two-day trip across Illinois, Iowa, Nebraska, Colorado, Utah, Nevada, and California. They rode on the second story deck of panoramic observation car, ate in the dining car, and made many new friends before arriving in Sacramento and driving to Cool, California for a final visit with her brother Paul. It was a highlight for Chris and an adventure she recalled and talked about many times in the past year.

Chris will be missed greatly as a mother, grandmother, sister, and friend. She will be in our hearts always.

A memorial service will be held for Chris at Maplewood Cemetery in Norwich, Connecticut in June where she will have a final resting place near her parents.

Please see Christina’s memorial at www.mykeeper.com/profile/ChristinaDonnolo/ for some wonderful pictures of her life.