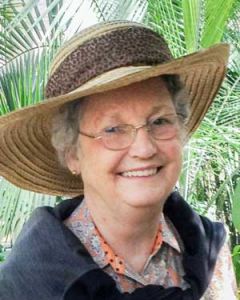 She is preceded in death by her parents, C.O. and Ruby Patterson, one daughter, Mary Carol Simon, three brothers, David Allen Patterson (infant), Wilbur (Pat) and Alma Patterson of Andalusia, Ala., Milton and Pauline (Polly) Patterson of Montgomery, Ala. and two sisters, Ruby Charles and Robert (Bob) McLaughlin of Pinckard, Ala. and Mary and S.W. Libby of Seattle, Wash.

She is survived by two daughters and their husbands, Karen and Lee Reed of Alachua, Fla. and Kathy and Steve Smith of Fayetteville, Ga., eleven grandchildren and eight great-grandchildren as well as several nieces and nephews.

Jean was a graduate of old Dale County High School in Ozark, Ala. She was a graduate of the Birmingham Baptist Hospital School of Nursing, class of 1956.  The majority of her nursing career was spent as a civilian nurse at Lyster Army Hospital, Ft. Rucker, Ala. for 25 years as well as Dale Medical in Ozark, Ala. Known as “Miss Jean” by friends and coworkers, she was beloved as GeeGee to her family.

A memorial service will be held on June 16th at Harp’s Crossing Baptist Church in Fayetteville, Ga.

A graveside burial service will be held in September at Pleasant Ridge Baptist Church, in the Arguta Community, in Dale County, Ala. with Holman Funeral Home of Ozark, Ala. directing.

Memorial donations may be made to the following: