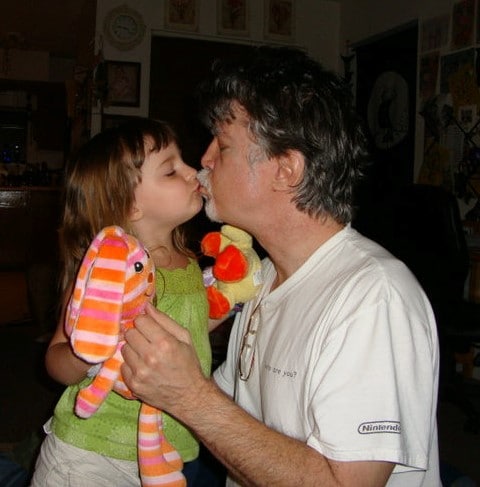 After a five-year battle with pancreatic cancer, Jeff, a.k.a. “Poppi” or “Poppa,” passed peacefully with his sweetheart by his side. A compassionate, loving and artistic soul, Jeff was born in Chicago on March 2, 1950. He was raised in Omaha, Nebraska by both Robert and Frances Bernstein. After studying art in San Francisco and Seattle, he worked for a time as a craftsman of children’s toys in Washington. In 1984, he moved to Georgia to raise his daughter on his own – they had many amazing adventures together.

He was a fixture of the Atlanta music and arts scene for many years. He was a multi-instrumentalist musician, painter, sculptor, and craftsman. Jeff was a successful visual and art sculptor, having had his creations displayed in a number of galleries throughout the country, including Forum Gallery at the Defoor Center and Thomas Deans Gallery in Atlanta. He was also an impressive musician having played with many legendary performers including John Prine, Bonnie Raitt, Chuck Berry, Michael Bloomfield and Bugsy Maugh (Paul Butterfield Blues Band), Sam Andrews (guitarist for Janis Joplin), John Hammond Jr., Peter, Paul and Mary, and Johnny Cash’s guitarist Luther Perkins. Jeff is proceeded in death by both his parents, and his fury-baby Bebe Baby Could. He is survived by the love of his life and sweetheart: Gay Clarke (Tiggy); his only daughter and sweetie pie-ski: Laura Norred; his son-in-law: Eric Norred; and his only grand-daughter: Joslyn Frances Bernstein, Jossy Magoo. He is also survived by all his beautiful and loving extended family and close friends.

Jeff touched so many lives with his loving friendship and passion for music and creation. During his final days at home, he was surrounded by many friends and family, lots of love, memories, music, laughter, and even had some bagels and smear. Even though he will be deeply missed here on Earth, he is now free of any suffering or pain. He’s finally in a much more beautiful and peaceful place.

Until we meet again, sweet and dear Poppi and friend, “Always with love” – because of you, love is all we know.

A memorial celebration will take place at a later date. Jeff requested a jam session to take place in his honor if it was meant to happen – impromptu. “No muck and fuss,” he said. However, since there are many who would like to join us, a little planning will need to happen. Stay tuned for an update once the arrangements have been made – this may take a bit more time to allow his family to grieve and get back to some normalcy.

Memorial contributions may be made to the Bernstein/Norred family at https://www.gofundme.com/loveisallheknows-alwayswithlove.

The Bernstein family is being assisted by Georgia Cremation, 1086 Highway 54 West, Fayetteville.