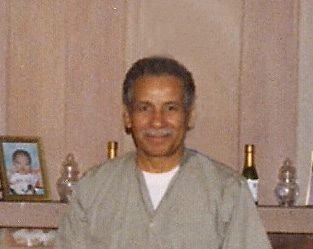 Mr. Ortiz was born on April 24, 1933.  He grew up in New York City.  Philip proudly served in the military and fought in the Korean War.  He was a devout Catholic.  He lived part of his life in New York, and then moved to Atlanta, GA where he met and married Flora Ortiz, his wife of 25 years.  Philip retired from Hilton Hotel.  After retirement, he enjoyed watching the horse races, traveling with his wife and spending time with his grandchildren.

Philip was preceded in death by his father, Felipe Ortiz and mother, Calixta Solano.  Philip Ortiz was a husband, father, pappa, brother and uncle.  He is survived by his loving wife, Flora B. Ortiz; step children, Carlos Lackey, Tiffany Hughes and YarKesha Lackey all of Georgia.  He is also survived by his grandchildren, JaMarquis Hughes, Anaya Hughes and Xyolin Fields; one sibling, Alice Bazan of Yonkers, New York; and a host of nieces and nephews.

Pappa was known for calling his grandsons -“Big Man” and his granddaughter – “Baby Girl”.  Everyone had so much respect and love for him.  Philip will always be in our thoughts and hearts.  He will be truly missed!

John 14:1-3 “Let not your hearts be troubled.  Believe in God; believe also in me.  In my Father’s house are many rooms.  If it were not so, would I have told you that I go to prepare a place for you?  And if I go and prepare a place for you, I will come again and will take you to myself, that where I am you may be also.