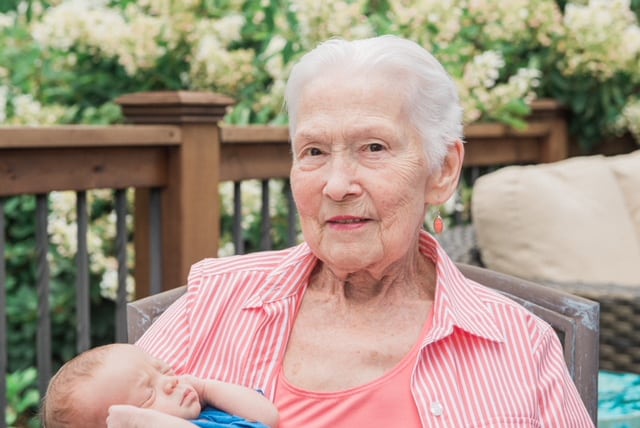 Thelma Hudgins, formally of Catawba, VA passed away peacefully at home with friends and family by her side on Thursday, September 6, 2018. Thelma, along with her husband Aubrey, moved to Suwanee, GA in 2001 where they lived with her son Michael and his wife, Sue Ann, until their deaths.

Thelma loved music and dancing. Thelma’s mother was musically inclined and insisted that all of her children learn to play musical instruments. Not only did Thelma play the piano, but she loved to dance to all music. She could not keep her feet still when she heard music of any kind, although blue grass and country music were her favorites. Thelma came from a very religious family and started studying the Bible with Jehovah’s Witnesses in the late 1940’s. Thelma symbolized her dedication to Jehovah God on 8-25-50. Until the day she died, she was a bold and zealous servant of him. She loved to read his word in the Bible daily and then share what she learned with anyone and everyone she met!  She lived for the day when she could say “life without end, at last!” Psalm 37:11,29.

Thelma loved spending time with her family, grandchildren and great grandchildren and many of her devoted friends and “adopted children” from the Suwanee, GA congregation. She especially was an animal lover! While living in Virginia, they lived in the country and adopted many pets: dogs, birds, opossums & a raccoon. The children would find them and she would raise them. In her later years, she had two special pets she adored and they gave her much comfort; her Sweet Bonnie and Big Boy, who was her “protector” as she called him.

Her memories will remain with us and comfort us. We all look forward to the day when Revelation 21:3 & 4 is finally fulfilled, “And he will wipe out every tear from their eyes, and death will be no more”.