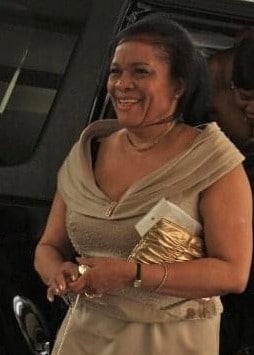 On Saturday, November 7, 2020 our loving mother, Adeline (Rosefort) Theodore Abel passed away at the age of 73.

Adeline was born on November 10, 1946, in Cap-Haitien, Haiti to Karinsky and Flavie Rosefort. Adeline Theodore Abel, affectionately known as “Ma”, is now our angel. In her late twenties, Ma left Haiti and made her way to Brooklyn, New York. Brooklyn is where Ma called home for many years and it is also where she raised her two daughters, Cindy and Crystal. Being the oldest daughter among many siblings, Adeline’s home was often the meeting place where many celebrations, traditions and Holiday dinners took place.

In 2007, Adeline retired from the City of New York as a Real Property Manager. Ma left the Big Apple to join the Georgia Peaches. Lawrenceville, GA is where she decided to call home. While living out her retirement, Ma not only took care of her grandchildren but she also cared for several neighborhood children. You see, not long after establishing new residency, Ma quickly became a mother figure to many. Ma never had an issue with opening up her her home and she was always ready to feed you. Ma was very special, patient, kind, loving, motivating, encouraging, consistent, and sweet with a hint of spice. Ma was always calm and graceful. When Ma was involved there was never a challenge too large and she never had any complaints. Ma’s passion for cooking, sharing her meals, packing up Tupperware (as long as you returned it) and caring for others was always sincere and she had a gift of making you feel a sense of belonging as if you were at home. Ma’s house was a welcoming refuge to many and in her kitchen stands a ceramic lighthouse, symbolizing a beacon of light to all. Ma gifted and blessed many by being a great influence and role model. Truly unlike any other, the way she lived and cared for people was a characteristic similar to a rare gemstone. Words cannot express the level of Ma’s brightness and the warmth she expressed. Ma’s legacy will be remembered by the many people she touched. While Ma wasn’t feeding you, she would convince you to watch an African movie with her. During her quiet moments she would play chess or tackle a 500 piece puzzle. Ma loved being serenaded by her all time favorite country music singer, Kenny Rogers. Early this year Ma’s health began to decline, and in September 2020, she was diagnosed with Stage IV pancreatic cancer. Ma spent her last moments surrounded by music, friends and family. Ma was peaceful and her smile shined bright throughout her decline. Ma will be missed but her love and legacy will live on forever.