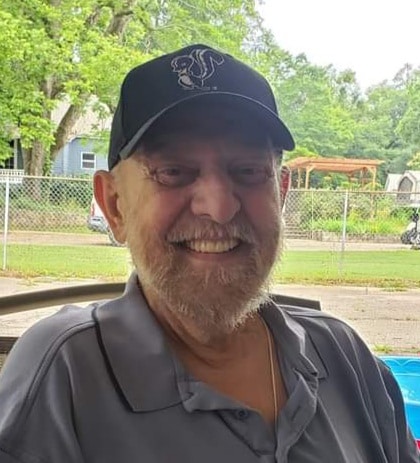 Clyde Caudell passed away peacefully at home surrounded by love on January 9, 2021.

Clyde was a proud United States Airforce veteran who served during the Vietnam War in Turkey. He was a golden soul that was kind and caring. He never bought a shirt without a pocket and cheated frequently when playing Scrabble. His loves were his family, movies, music, and The Blue Frog in Woodstock, GA. He also took pride in his American Indian heritage.

Clyde had no friends because anyone he loved was considered family.

He is preceded in death by his father, Edd Crowder, his mother, Mary Crower, and his brother, Eddie Crowder.

Clyde is survived by his brother, Tim Crowder (Teresa) of Newnan, GA, and his sister Gale Groves (Donnie) of Stockbridge, GA.

He is also survived by his girls, Mara-Louise Cullen (Justin), Brittney Paugh (Wesley), Stephanie Thomas (Joseph), Karisa Zuke (Nick), Mandi Sonafrank (Michael), and serveral nieces and nephews of which he loved with all his heart. Clyde also leaves behind Lynyrd, his loyal dog that never left his side.

A memorial service will be held at a later date.

In lieu of flowers, the family asks that donations be made at https://gofund.me/dfbc39b9 so that proceeds may be used to fulfill his final wishes. Any remainders from the proceeds will be donated to Saint Judes Childrens Hospital in Clyde’s name.

The Caudell family is being assisted by Georgia Cremation, 7500 Veterans Parkway, Suite A, Columbus, Georgia 31909, 706-577-0055. The family invites you to leave a condolence or share a fond memory of Mr. Clyde below.