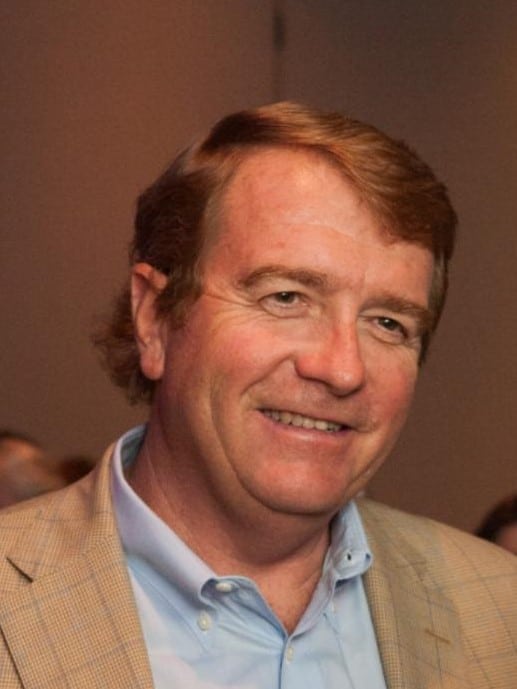 David was born December 1, 1958 in Danville, Virginia to Carolyn (Edwards) and E. Ashby Baum.  He graduated from Midlothian High School in Midlothian, Virginia, and received a BS in Economics from the University of Virginia in 1981.  While at UVA he met the love of his life, Chris Mathis, who became his wife October 3rd, 1981. They began their married life in Richmond Virginia, where David worked for United Virginia Bank while completing his Masters in Finance at Virginia Commonwealth University. After completing his Masters degree in 1988, David left UVB to join Lawyers Title as Risk Manager.  He seized an opportunity to work as a lender for a small bank, eventually going  back to Lawyers Title where he served as a co-consultant, traveling throughout the northeast.  He returned to UVB/Crestar briefly as a commercial lender, until his Lawyers Title  boss lured him to Charlotte, NC as state manager in November of 1993.   In March of 1998 he joined Chicago Title as state manager of North Carolina.  2002 brought another move to Atlanta to become the Georgia State Manager for Fidelity National Financial, where he rose through the ranks to become EVP and Division Manager of Fidelity National Financial with responsibilities for operations in ten states.  He was beloved by all of those that worked for and with him, whether it be a new employee or the CEO…he treated everyone with the same respect.

David enjoyed spending time with family and friends, golfing, grilling on his Big Green Egg, watching & attending sporting events (especially his Hoos, Dawgs, and Falcons), and walking the beach.  His happy place was either Seagrove, Florida or Rock Creek Cattle Company in Montana, and thankfully he was able to enjoy both this past year.

David was a man of many titles – Optime, author, professor, museum curator/CEO/tour guide, commissioner,  Attic Airlines mechanic, marathon runner (it was one time in 1980, but he would want us to include this), coach/general manager, boss, grandpa (Abu), dad, and husband.

David was active in his community teaching confirmation, coaching and taking leadership roles in little league sports, working as a board member of the Ronald McDonald House, keeping score and announcing for the high school baseball team, serving as a HOA board member, CEO of the infamous ‘Room of Enchantment’, and other volunteer jobs.  He was a published author of his book(s) of advice for his three children entitled “When You Wake Up, Get Up and When You Get Up, Do Something.”  All who heard “readings” were amused, to say the least.  He was eager to lend a hand when a neighbor had a need, and frequently organized outings for his friends and family.  An avid UVA fan, he was thrilled to watch his Cavaliers win the 2019 National Basketball Championship in person (still the reigning champs!)!

Due to COVID restrictions, a small family service will be held in January.  For those that wish to watch the service, a link to the live-stream will be posted online at https://www.caringbridge.org/visit/davidbaum.

In lieu of flowers, the family requests that donations be made to either Decatur City Church, 4400 North Point Parkway Suite 100, Alpharetta, GA  30022 or Atlanta Mission at atlantamission.org.

David always made it a point to tell his friends and his family that he loved them, so in honor of David, love those close to you and tell people you love “I love you” frequently!