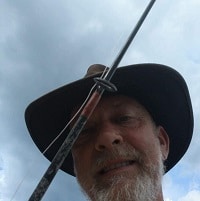 Delbert Raymond Davis, Sr. was born October 24, 1956 in Columbus, Georgia to the late Ila Mae Griggers Hall and Delbert Grady Davis. Mr. Davis was always an outdoor enthusiast, whether showing off his green thumb in his annual garden, tending to his farm animals, or camping and fishing. He had a large place in his heart for animals especially those that were abandoned or injured. Throughout his life, he raised dogs, cats, chickens, and horses and enjoyed every minute of it.

Antiques were a hobby of his, especially classic cars. He had his own auto body shop, where he would fix up classic hotrods and give them a fresh coat of paint. He was a fan of western tv shows and movies with his favorite being “Gunsmoke.” He was a Christian man and at one point had served as the pastor of a small local church. Mr. Davis was a former member of the Army National Guard and had a deep respect for his fellow servicemen and servicewomen.

Later in life, he began working as a long-haul truck driver. He enjoyed this job for over twenty-two years that allowed him to visit most of the continental United States. He loved his family and enjoyed the times they were able to spend together making memories.

In lieu of flowers the family asks that donations be made to Kindred Hospice, 2740 Headland Avenue, Dothan, AL 36303 or by visiting KindredHealthCare.com.

The Davis Family is being assisted by Georgia Cremation, 7500 Veterans Parkway, Suite A, Columbus, Georgia 31909, 706-577-0055. Condolences may be offered by visiting www.georgiacremation.com.