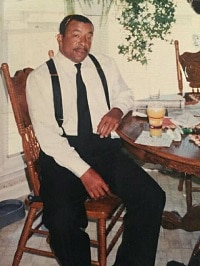 Eddie Lee Horn was born April 2, 1959 in Whatley, Alabama to the late Elsie Virginia Horn and Marshall Horn. After graduating from high school, Mr. Horn joined the United States Army and spent eight years in service before his honorable discharge. During his military career, Mr. Horn earned the Army Service Ribbon, Overseas Service Ribbon, NCO Professional Development Ribbon, Good Conduct Medal, as well as other badges and accolades. Upon his discharge, he had earned the rank of Sergeant.

During his working career, Mr. Horn was a carpenter by trade and thoroughly enjoyed his work. He had been self-employed as a contractor for many years. He loved to build and would be considered a master carpenter in regard to his woodwork. In his spare time, Mr. Horn enjoyed the relaxation of being outdoors, especially when he had a fishing pole in hand. He was a fan of the Auburn Tigers and enjoyed watching them play any Fall Saturday. He was a devoted fan of Western Shows, in particular “Gunsmoke” and “Bonanza.”

A memorial service will be held 1:00 PM CST on Saturday, November 18, 2017 at Whatley First Baptist Church in Whatley, Alabama. The family will receive friends before and after the service at the church.

In lieu of flowers, the family kindly requests for donations to be made to Kindred Hospice for the compassionate care and support shown to Mr. Eddie Lee Horn in addition to his family.

The Horn family is being assisted by Georgia Cremation, 7500 Veterans Parkway, Suite A, Columbus, Georgia 31909, 706-577-0055. Condolences may be offered by visiting www.GeorgiaCremation.com.