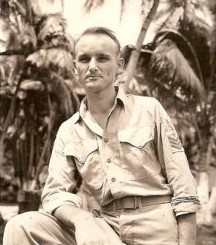 Edward James Janos age 97 passed from this mortal life on March 6, 2019. Ed and his wife Violet moved to Peachtree City, Georgia from Scottsdale, Arizona in 2017. Ed was born in Los Angeles California on April 9, 1921. He served in the South Pacific during WW 2 as a corpsman with the Third Marine Division from Guadalcanal to Guam. He met his future wife Violet McKay in San Francisco waiting to embark for the South Pacific. They were married June 30, 1946 while Ed was finishing his degree in accounting from UCLA. Ed was an executive in financial services working as a bank examiner, comptroller, treasurer, director of branch operations and finally as the founder, CEO and Chairman of Sun State Savings and Loan in Phoenix, Arizona.

Ed was a faithful friend, loving husband, father, grandfather, great grandfather, brother and uncle. He was an avid fisherman, skin diver, and bridge player with the Encanto Kiwanis bridge group.

Services will be held at 11 AM April 13 at Carriage Lane Presbyterian Church (PCA), Peachtree City, GA.