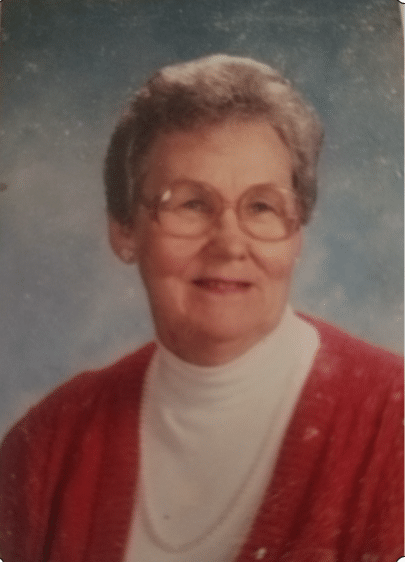 Max was born on July 19, 1929 in Colonial Heights, Virginia to Lottie Wilmoth Johnson and Henry E. Johnson. She attended Hopewell High School where she played basketball and was a cheerleader. She is an alumni of John B. Stetson University and Columbus College.

Max and her husband, Bob, moved to Columbus in January 1957 with their four boys, Robert, Danny, Richard, and David, who all graduated from St. Anne’s School and Pacelli High School.

Max began her career at St. Anne-Pacelli Catholic School in 1958 as the coach of Pacelli High School’s first girls’ basketball team. In June, 1959, Monsignor Herman Deimel and Sister Aurelia hired her to teach third grade. During her years of teaching, she was named the Outstanding Teacher of the Year by her peers, she became the school’s Athletic Director and helped organize a grade school sports program with five other schools, serving as president of the program for several years. She has been honored on three separate occasions in the “Who’s Who Among America’s Teachers”. She was a faithful and dedicated teacher at St. Anne’s School for 34 years, and continued as a substitute for another 12 years. She was the first lay Eucharistic Minister at St. Anne Church and was the first female elected to St. Anne’s Parish Council. She headed the CCD program for a number of years before a permanent director was hired. She was a member of the Rosary Group, co-chaired the Alter Society, volunteered at St. Francis Hospital, was a past president of the Knights of Columbus Ladies Auxiliary and the St. Anne’s Council of Catholic Women. On May 20th, 1993, Mrs. Max Nolan received a proclamation from Mayor Frank K. Martin and Mayor Pro Tem A.J McClung of Columbus, Georgia proclaiming May 20th as Max Nolan Day in appreciation for her years of dedicated service in education. In 2001, Max received the Diocese of Savannah Bishop Gartland Service Award, and in 2013 she received the Margot Bradley Service Award.

A memorial mass will be celebrated at a later date. Family members would like to extend their sincere gratitude to the staff of Kindred Hospice. A special thanks for the special care given by Natisha Mays, and friends Lamont and Katrina Alexander, Tamara Boykin and family, Jamal and Hershawna.

Over the forty-six years of teaching she taught many children and their children, many of whom have expressed how she touched their lives. We love her and will miss her. God Bless.

The Nolan family is being assisted by Georgia Cremation, 7500 Veterans Parkway, Suite A, Columbus, Georgia 31909, 706-577-0055. The family invites you to leave a condolence or share a fond memory below.