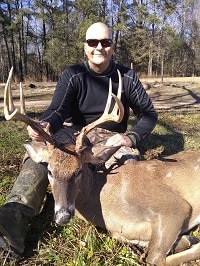 Jack Lawrence Anderson, Sr. 55 of Box Springs, GA passed away October 9,2019 with his children by his side at home.

Jack was born August 17, 1964 in Waycross, GA the son of Margaret Louise McFadden Anderson and Ronald Ray Anderson. He loved the outdoors and enjoyed hunting and fishing and had many of his trophies to prove his devotion. Prior to Jack’s illness he was an iron worker with Cowart Enterprise in Columbus. He could drive you around Columbus and boast about buildings that he had help to build. He was preceded in death by his mother Margaret McFadden Anderson, his wife Carol Sue Ensley Anderson and brother Pete Anderson.

He is survived by his father Ronald Ray Anderson and his wife June of Tennessee, his children Jack L. Anderson, Jr. and Tiffany Anderson both of Box Springs, Georgia along with many close family and friends.

The Anderson family is being assisted by Georgia Cremation 7500 Veteran’s Parkway Suite A Columbus, GA 31909. 706-577-0055. The family request that you leave online condolences below.