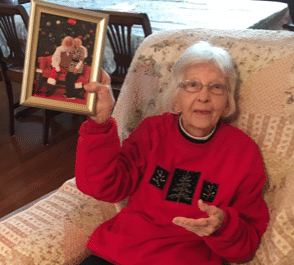 She worked with C & S Cleaners, Warner Brothers and as a nurse prior to getting married. Jeanette met Durell Talmadge Moon (Dee) on a blind date in 1956 and they were later married. They had two daughters and were married almost 62 years.

She is survived by her two daughters and their husbands, Jilda & Wayne Lange and Gina & Glynn Branham. She is also survived by her brother and his wife, Herman Joseph Keaton, Jr (Billy) and Janelle Keaton, along with their two sons and wives.

She was a very strong Christian woman and would help anyone and everyone. She loved to give. In her later years, she began making scissor holders out of potholders. She also made eye glass holders and she made trays filled with all sorts of goodies. She gave thousands away to family, friends and strangers. She would always say, “I made this for you” even when she didn’t know them. She was known as the “Scissor holder lady”. Psalms 91 was her favorite Bible chapter. She read it so many times that the page in her Bible had to be taped.

A Celebration of Life will be held at a later date and time determined.

The Moon family is being assisted by Georgia Cremation, 1086 Hwy 54 West, Fayetteville. Messages of condolence may be left at www.GeorgiaCremation.com.