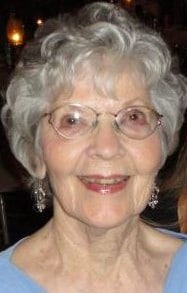 She was born in Atlanta, GA on November 28, 1930, the daughter of Augustus and Elizabeth Parnell.

Joanne began her career as a legal secretary with Alston, Foster, Sibley, and Miller in Atlanta, GA.  She then became a US Civil Service employee, working with multiple branches of the US Government, beginning in North Carolina with the US Air Force, and Department of Agriculture.  After moving back to Atlanta, she went on to work for the US Forest Service, DCAS (Defense Dept.), then transferred to DCASR (Defense Dept.) in Los Angeles, CA.  After relocating back to Atlanta, she worked for the CDC where she retired after 22 years of civil service with he US Government.  She continued to work part time as an Asst. Office Manager at Porter Steel Inc., founded and owned by her son, Lowry (Lowe) Porter.  She fully retired in November of 1992 and relocated to Shiloh, GA.  She always though was called back to the suburbs of Atlanta, the home of her heart.

Joanne leaves a legacy of fun, laughter, love, and adventure.  She enjoyed a good “cup of Joe” as much as a robust glass of Red Zinfandel.  She loved travel, good food, the ocean, the Atlanta Braves, playing cards with her family, and the game of “Sorry” with the grands.  Having a great sense of humor, she learned to laugh at herself, which was a great characteristic for us to witness.  She was greatly loved and will be greatly missed.

A Celebration of Life will be held at a later date.  She will be laid to rest at the Porter Family Grave Site in Shiloh, GA.