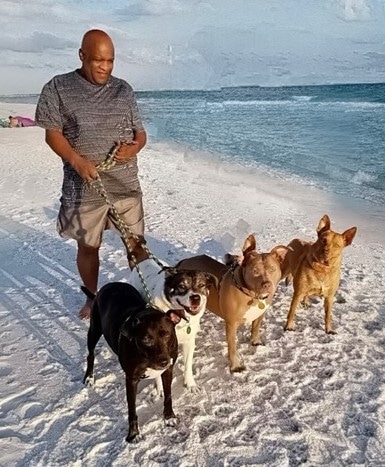 Johnny was born, raised and educated in Baltimore, Maryland by his mother, alongside his three sisters and younger brother. In 1964, he graduated from Paul Laurence Dunbar High School, where he also was on the wrestling team. Right out of high school, he started working at Sparrows Shipyard which enabled him to buy his first car, a green Pontiac GTO, which he absolutely loved. During this time, he started working for Western Electric.

He watched Western Electric turn into AT&T in which they relocated him to the capital of the south, Atlanta, Georgia. AT&T turned in to Lucent Technologies. After working thirty-three years, he retired and enjoyed spending time with his life partner Melonie, his daughters, grandchildren and his dogs. Johnny might have loved his dogs as much as his grandchildren (because dogs do not talk). He had no trouble meeting new people. He never met a stranger and was a very likeable and loyal friend. Johnny was never involved in nonsense and often exclaimed, “Don’t bring that mess ‘round me!”, if he smelled drama brewing. Johnny was always the life of the party by whistling and serenading his friends. People were drawn to him due to his organic character, and animals sensed this as well. Whenever Johnny came home, his first stop was always Jimmy’s and he never settled for a crab cake that was not made of lump crabmeat! In Atlanta, he often made his signature crab cakes for his grandchildren and feeding his dogs burgers before embarking on a journey through the Yellow River Game Ranch. The man that Johnny was will resonate through everyone he has ever met. Johnny never complained and would not want us to be sad but would want us to remember the good times.

Johnny is preceded in death by his parents Luke and Dorothy Martin; granddaughter,  Savannah Malone; nephew, George Diggs; and his dogs, “Lady” and “Java”.