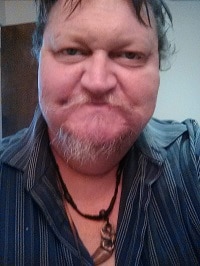 Johnny Paul Brackin was born May 24, 1967 in Philadelphia, Pennsylvania to Betty Ann Brackin and Johnny Edward Brackin. Paul as most knew him was always very artistic and enjoyed drawing and sketching. He was always a huge fan of Kiss and Queensryche, which was one of the reasons he learned to play guitar and sing. He had been a vocalist for a few local rock bands during his younger days. He had worked in the construction industry for many years and later worked as a pizza artist with Pizza Hut. He enjoyed spending time with his family, sitting around the local fishing hole, or watching his younger brother, “Big Ben,” in the wrestling ring. Paul had a love for animals and was Christian by faith.

Johnny Paul Brackin, 50, passed away Sunday, February 11, 2018 at his home in Columbus, Georgia. He was preceded in death by his grandparents and nephew, Cody Brackin.

A private memorial service will be held at a later date.

The Brackin Family is being assisted by Georgia Cremation, 7500 Veterans Parkway, Suite A, Columbus, Georgia 31909, 706-577-0055. Condolences can be offered at www.georgiacremation.com.