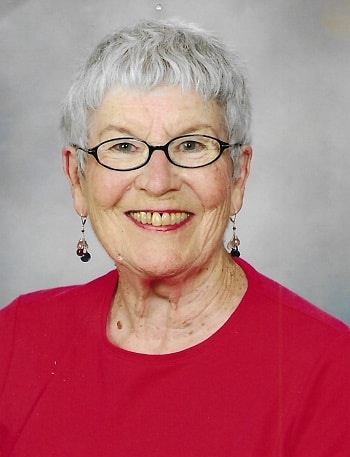 Kathryn (Kate) T. Mewhorter was born August 20, 1929 in Malta, Montana to the late Teresa O’Connor McNeal and James McNeal. Kate was a caregiver at heart, which led her to pursue a lifelong career in healthcare. She received her nursing degree from St. Mary’s School of Nursing in 1953. Not only was she a caring and compassionate nurse, she made great contributions to many diverse areas of St. Mary’s Hospital and the Mayo Clinic in Rochester, MN.

During her career, she held many professional and leadership positions including: Nursing Supervisor, Inservice Instructor, Patient Care Coordinator, Director of Nursing Service, Assistant Director of Business Administration, Director of Patient Business Services, and Unit Head for Medical Revenue Systems. She also established the Utilization Review Section at St. Mary’s Hospital and served on that committee for fifteen years. Her skills were highly touted and upon her retirement, she received numerous letters from directors and co-workers thanking her for her devoted service.

In her retirement she continued her service to the community as a volunteer at both St. Mary’s Hospital and the Mayo Clinic, where she served as Secretary and President of the Poverello Foundation.  In her spare time, Kate was a talented knitter and an avid reader. Her most precious pastime was spending time at the family cabin in Stockholm, WI, where her family would gather.  She married Henry “Hank” Mewhorter and together they raised three daughters, Shawn, Erin, and Mary.  Kate and Hank were happily married until his passing on November 2, 2015.

She is preceded in death by her husband, sister, Anne Gentling, and grandson, Chad Mader. Left to cherish her memory are her daughters, her sister Margaret (Mardi) Deml of LaCrosse, WI,  and five grandchildren, Stuart Duncombe, Rocky Vargas, Athena McLoud, Axel Mewhorter, and Olivia Mewhorter, five great-grandchildren, and a host of extended family and friends.

The family requests memorial contributions be made in her memory to the Poverello Foundation at the Mayo Clinic, Rochester, Minnesota.

A memorial service will be held at Macken Funeral Home at 10:00 a.m. on Oct 10, 2020.  Following the visitation and service the burial will be held in Stewartville with a reception following at 1:00 pm at the Eagles Club in Rochester.

The family invites you to leave a condolence or share a fond memory of Kathryn below.

The Mewhorter family is being assisted by Georgia Cremation, and Macken Funeral Home.