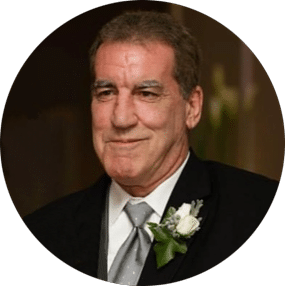 On his 66th birthday, Langdon William Newburn passed away in peace, surrounded by love, in the comfort of his home on January 30th, 2022. Langdon is reunited with his father, the late William Newburn, and they are without a doubt, fishing off the piers of gold together.

On January 30, 1956, in Ridgewood, NJ, the “World’s Greatest Fisherman” was born to William and Marion Newburn. Lang would never tell you, but growing up he was a very talented baseball player and golfer. During his high school years, the family moved to Atlantic Beach, FL, where he could often be found fishing or golfing. He always valued education as he was a philosophical thinker, an efficient mathematician, and had an impeccable memory.

Lang was humble to his core until it involved talking about his daughters. He made taking care of two little girls look easy. He lovingly let them decorate his hair in bows, acted like the father/daughter dance was the highlight of his year, and built doll furniture in his shed. Of course, he also introduced them to BB guns and slingshots. He taught them to drive his truck and made sure they knew how to hook bait. The only thing he asked for in return, was for the two of them to take pictures holding his (slimy) “catch of the day.” Melissa inherited Lang’s contagious laughter that fills a room. He lived vicariously through Sarah who shares his love for sports and the ocean. He instilled in them to lend a helping hand whenever possible and to enjoy the little things in life. It’s a real shame neither of them got his cooking skills.

In July of 2003, Lang moved to Lilburn, GA, and married Patty, who loved him since she was a little girl. Patty and Lang built a life they loved and a successful catering business serving the Atlanta area, Loving Spoonfuls Catering. Lang was known for his Chicken Piccata, his craftsmanship, his stubbornness, and his witty sense of humor. He loved his family, his animals, and the hobby he took up three years ago – The Art of Bonsai (self-taught). He especially enjoyed his early mornings spent with his granddaughter, Rylee.

Lang will be remembered for being the hardest and most talented worker in the room. He was the epitome of humble and modeled “actions speak louder than words.” Those who knew him would say he was “one of the good ones” and they would add, “there will only be one Lang” — beneath that tough outer shell and those cuts on his hands, was a heart of gold.

Lang never lost his childlike spirit and love for life. He was quite the (exaggerated) storyteller — always bringing people to tears from laughter over his antics. He found ways to hype up the most mundane tasks into a great adventure. There really was never a dull moment when you were around Lang — he was a total goofball!

Lang is survived by his mother, Marion Newburn; the love of his life, Patty Newburn; daughter, Melissa (Wakefield) Wade; daughter, Sarah (Collin) Chavous. Also survived by sister; Kathy Newburn and niece, Kate Sheldrick; Patty’s children, Maggie and Tommy Stanhope; and his precious grandchildren, Emily (6) and Alexa Kate (3); Colton (5) and Peyton (2); Rylee (5). Lang leaves behind a legacy of resiliency, determination, intellect, and kind-heartedness in each of the little personalities of his grandchildren. They will forever love and miss their “Grandpa”. Pieces of him live on in all of those he left behind. The world was a better place because of Lang.

A private memorial will be held at Saint Stephen The Martyr Catholic Church in Lilburn, Georgia on Saturday, February 26, 2022. If it were up to Lang, not a tear would be shed, not a donation made, and “not another word about it.” To honor his memory, we encourage you to take a young one in your life fishing.

Donations may be made in Lang’s memory to AFLAC Childhood Cancer and Blood Disorder.