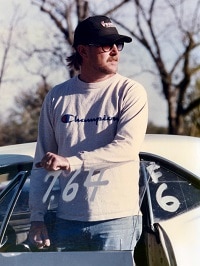 Lawrence Thomas McGregor was born February 12, 1956 in Augusta, Georgia.  After a 7 month battle with cancer he passed away in his sleep on September 5, 2017.

Larry was the nicest guy. He was quite the philosopher who led you to your own answers. He had a dry wit, an infectious smile and a great laugh.  Larry was always willing to give you information that you were entitled to have.  He would give anything to see those he cared for happy.

His parents were the late Therese Irene and Altena “Mac” McGregor. Larry’s first marriage was to Janis Grimes (Buddy) Eberhart of Columbus, Georgia who brought with her daughter Christina Grimes (Joseph) George of Augusta, Georgia.  Janis and Larry were overjoyed with the birth of their daughter Laura Tiffany McGregor (Nicholas Van Dyken) of Hampton, Virginia.  Laura changed him from a rogue late night guy to a diaper changing Daddy.

In 1995 Larry married Mary Lou Collins of Columbus, Georgia.  Along with Lou came her daughter Lauren (Matthew) Nichols of Stockbridge, Georgia.  Larry and Mary Lou were married for 22 years. During their time together they had a cherished bond, they enjoyed traveling, going to races and watching their children grow up.

Larry was again overjoyed at the arrival of a son Lawson Ryan McGregor of Columbus, Georgia who would carry on the McGregor name. Larry loved and was loved by all these children.  Recently becoming a grandfather to Bradon Tripp Van Dyken, Laura’s son, brought renewed meaning to Larry’s life. During cancer treatments, he eagerly shared daily Tripp pictures with the nurses, doctors and other patients.

Larry has two loving sisters and their husbands: Irene McGregor (Jim) Cawthorne of Columbus, Georgia and Mary “Cricket” McGregor (Jeff) Beal of Indian Harbour Beach, Florida.  Irene and Jim welcomed Larry into their home in November 2016 and were there for his cancer diagnosis this past February.  Cricket stayed in constant contact while Irene and Jim cared for him daily throughout his hardships until his death.

Larry loved anything to do with motorcycles or cars. If cut, he bled Chevrolet.  Larry enjoyed car restoration and could build a car from the frame up.  His taste was understated and clean, preferring custom wheels and tires.  He was not big on chrome and loved a throaty motor.  Larry often had to stop with the windows down to listen to one.  His beautiful handsewn upholstery was renowned.  Larry’s happiest times were during family gatherings at the Phenix City Drag Strip.  There, he was his own mechanic and driver while regularly taking home the trophy with his white 1986 Camaro SS.

Larry worked as an Automotive Service Advisor for over 25 years, calling Bill Heard Chevrolet home.  His desk was covered with letters of praise, plaques and awards.  He was adored by a trusting loyal customer base who never minded waiting in the longest line to receive his personal touch.  His coworkers appreciated his honest, competitive spirit.  “Paw-Paw” kept them listening with car tales that were both instructional and interesting.  He won dealership trips, Winners Circle diamond rings and a Gold Presidential Rolex watch. Believing that a watch on his wrist should not cost more than the car he drove, Larry sold it and bought some five spoke wheels and tires shortly thereafter!

Larry always had a smile and a hug for everyone.  He was a “Simple Man” and will be deeply missed by his many nieces, nephews, extended family and devoted friends.

Please come to either or both of the following services for Larry on September 17, 2017.  The Sunday 11:30 am Mass at St. Patrick Catholic Church at 1502 Broad Street, Phenix City will be offered in memory of Larry McGregor.  In his youth Larry was an altar server there and had sung in the choir since Thanksgiving.

There will be a celebration of Larry’s life at the Log Cabin, 1100 35th Street, Phenix City, AL 36867 from 3:00-5:30 pm. Please wear casual attire and bring your Hot Rods, motorcycles and memories to share.  Refreshments will be served. If you want to bring food please call Mary McGregor Beal at 321-223-6470.  If you want a last drink with Larry, BYOB.

In lieu of flowers, donations can be made to Victory Junction, a camp by the Kyle Petty family for special needs children. http://victoryjunction.org/the-gift-of-camp/ .  His family would like to thank the compassionate staff of Saint Frances Hospital, the Columbus Hospice and Georgia Cremation for their exceptional care during this difficult time.  Condolences may be offered at www.georgiacremation.com.