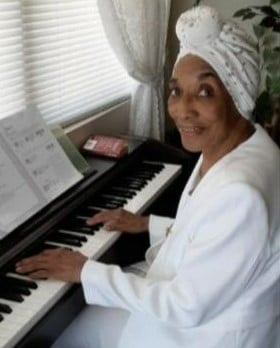 Margaret Meredith Hall 1937-2021 left this Earth to join our Heavenly Father on December 27, 2021 following 84 years of Life. She was a mother, teacher, counselor, friend, and Godly servant focusing her mission on doing Almighty God’s will as she felt led.

“Momma Swami” as she was affectionately called by her Loving children because of her vast reservoir of Godly Wisdom and Earthly knowledge, was born April 28th 1937 in Buffalo,  New York to Sylvia Rose (Deceased) and William Hall. (Deceased)  She was the 13th of 17 brothers and sisters, surviving them all prior to her going home. Part of her “Swami” persona  also developed from the many stylish and colorful head wraps she often wore reminiscent of a wise Sultan. At age 19, she married George Edward Brown of Buffalo New York in 1956, remaining committed to him until 1970 when they divorced. She briefly remarried Mr. Robert Parker in 1978, with that union ending a few years later.

Margaret and George Brown brought 4 children into the world through their union, Edward Andrew, Karl Vincent, Adrienne Darsia, and Marilyn Alicia. As a mother, Momma Swami was a loving but stern parent insisting on discipline, honesty, and hard work from her children. She took a job when Eddie & Karl were toddlers as an employee for the Erie County department of social services in Buffalo, New York where she worked as an office clerk for nearly a decade.

While holding that full time job as well as various part time positions, she attended night classes at the State University of New York at Buffalo where she eventually earned a Bachelor’s degree in English in 1974. Then in the early 80’s, she earned a Masters in Education from Arizona State University in Tempe, Arizona. She was an Educator by career, teaching English composition over the next two decades at the elementary, secondary and collegiate levels. She was also a highly specialized medical transcriptionist working exclusively for the top pediatric surgeon in Western New York at Children’s hospital of Buffalo, transcribing his detailed surgical procedures.

In between her professional pursuits, she honed her natural talent as a cabaret club singer, appearing as a featured attraction in various night clubs in cities like Buffalo NY, Cleveland OH, & Boston MA, where she often performed alongside her brothers who were all accomplished musicians themselves. Margaret was such a gifted singer; many marveled why she had not signed on a national recording label? Her devotion to Family along with her true passion for teaching and missionary work kept her from pursuing a professional singing career.

Her personal talents and professional obligations however only half describe this amazing servant of God. She frequently hosted Bible studies, mentored to troubled single women, and wrote daily devotionals to share her Faith with the lost. She also did mission work in both the US & Foreign nations traveling as far as Europe, Africa & the Middle East, sharing the Gospel and ministering to those in need. She in fact was an accomplished traveler in her own right, living in a variety of places and cities like London, Cairo, and Jerusalem…  here in the US, she lived in Biloxi Mississippi, Fayetteville North Carolina, Little Rock Arkansas, Phoenix AZ,  Billings Montana, Boston MA , Philadelphia PA, Portales NM, and most recently, Atlanta, GA.

Throughout her life, Margaret strived to grow stronger in her  faith having been raised Catholic and losing her mother at an early pre-teen age. Despite many hardships being raised by relatives after her Mother died, she remained a strong disciple of Christ believing  Almighty God had not abandoned her, and in fact kept her protected to do his will for her Life. She lived that Truth through the vibrancy of her words, the inspiration of her dedication & loyalty to friends, trusted devotion to her Family siblings, as well as unlimited Love for her own children, grandchildren and great grandchildren.

Margaret was a member for many years of Mount Airy Church of God in Christ in Philadelphia, PA where she taught Sunday school. Most recently her Church home was Faith Transplant Church (Generations) in Portales, NM.