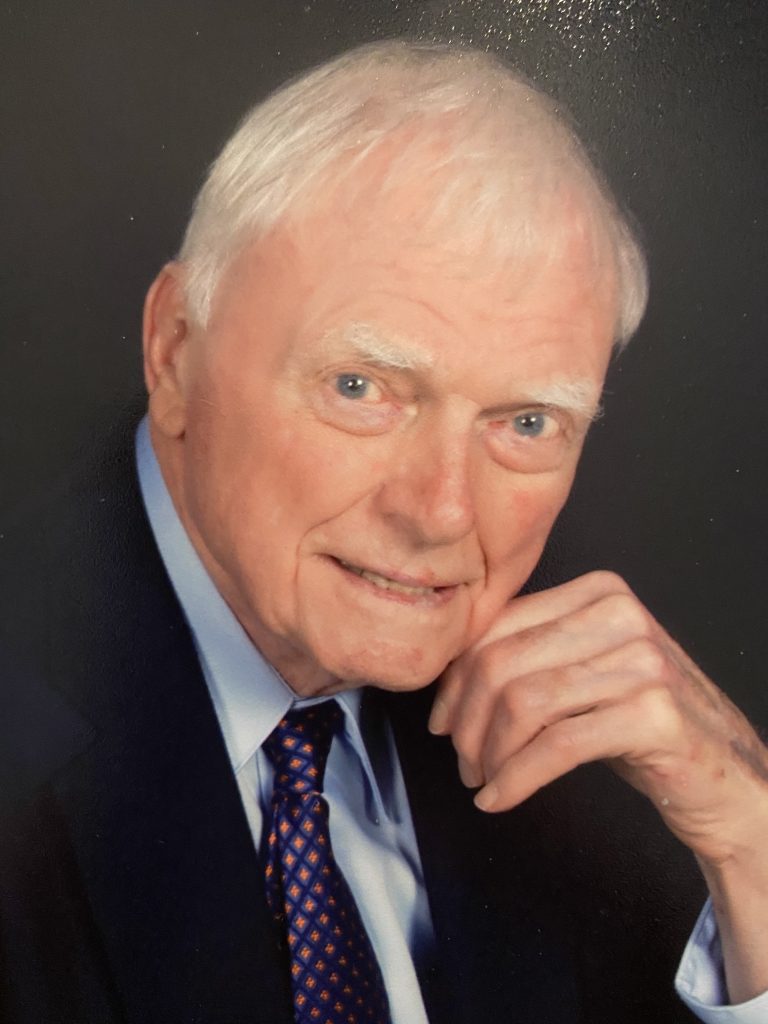 An amazing, earthly journey of 91 years came to an end Sun., Sept. 6, 2020 but an immediate transition to eternal life with his Lord and Savior Jesus Christ after Parke Hunter Sickler of Fayetteville, Ga., (Hope Center Memory Care) peacefully passed in his sleep. He was preceded in death by Bernie H. Sickler, his loving wife of 53 wonderful years until her passing in 2004. Parke was also preceded in death by his beloved brother, John (Jack) T. Sickler (05-23-1933–03-19-1991).

Parke was born Feb. 5, 1929 in Orange, N.J., the son of Parke Custis Sickler and Eleanor Hunter Sickler. He attended public schools in Glen Ridge, N.J. At Glen Ridge High School, he played a big role on the Ridgers 1944 undefeated state championship football team (8-0) as a sophomore, two-way player at fullback and linebacker. While at GRHS, he played against rival Montclair High with Buzz Aldrin, later a NASA astronaut, who landed on the moon in July 1969. Glen Ridge defeated Montclair 14-7 in Week 7 of the 1944 unbeaten season. After his senior football season in 1946, Sickler — team captain at GRHS and also one of the top school boy players in Eastern football — was a special invitee of the Downtown Athletic Club of New York City to attend the 1946 Heisman Trophy ceremony for Army’s Glenn Davis. It was the ultimate honor for a high school student-athlete. He was an outstanding student-athlete and also played baseball and basketball. 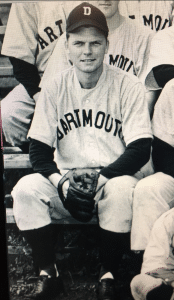 Following graduation from GRHS, Parke had numerous academic offers to attend some of the nation’s premiere colleges including Dartmouth, Princeton, Yale, Cornell, LaFayette, Rutgers and others. Parke chose Dartmouth College in Hanover, N.H. and in 1947, began a wonderful relationship with the school that continued to his passing Sept. 6. He played freshman and varsity baseball under Eddie Jeremiah (a USA Hockey Hall of Fame legend and also Dartmouth hockey coach) and freshman and junior varsity football as well.

In addition, Parke was captain of the varsity baseball team. He was a proud member of Beta Theta Pi fraternity and president his senior year; Casque & Gauntlet Society; Interfraternity Council; and other organizations. He earned his undergraduate degree in 1951 and later his MBA from Tuck Business School (1954) as part of the Tuck/Dartmouth 3-2 plan. He worked in the dining hall throughout his career at Dartmouth as well. Parke loved Dartmouth and brought his family for football, hockey and baseball games and other events in the 1960s-1970s. He also was a member of the Bartlett Tower Society. Parke made numerous donations and gifts over the decades for a multitude of Dartmouth projects. They include academics, fundraising & development and athletics since his arrival in Hanover as a freshman in 1947, contributions spanning 73 years. 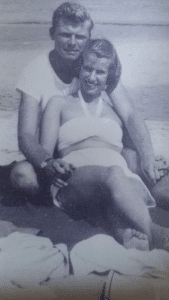 The most significant event in Parke’s life came in the summer of 1950. That summer, Parke served as a busboy and a very pretty young lady and waitress named Bernie Brown immediately caught his eye after she spilled a tray while both worked at the famed Chatham Bars Inn in Chatham, Mass. (Cape Cod). He quickly ran over to help Bernie clean up the spill and that was it. He was hooked. Parke later proposed to Bernie “somewhere in the woods” he fondly remembers at Manchester By The Sea, a beautiful community they always loved to visit. It didn’t take long for Parke and Bernie to find a wonderful love together as they married Nov. 11, 1951 and had four children in an amazing marriage of 53 years. Parke was a busy man in the early 1950s and 1960s. He proudly served his country as a captain and aviation supply officer with rank of 1st Lt. in the United States Marine Corps (Quantico, Va.,1951-53, Semper Fi!), married his sweetheart, the former Bernice Helen Brown in 1951, earned his MBA at Dartmouth’s Tuck Business School in 1954 and welcomed the first of four children, Gail, in 1952. All four of his children were born in different states — Gail in Miami, Fla. in 1952; Jan in Sacramento, CA in 1956; Parke in Hinsdale, Ill. in 1960; and Scott in Melrose, Mass. in 1962. 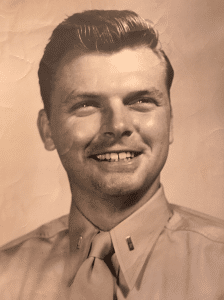 The Sickler family has a special fondness for Southern Rhode Island and Kingston, in particular. Parke’s parents, Parke C. Sickler and wife Eleanor H. Sickler, relocated from Glen Ridge, N.J., first to Providence and later to Kingston in 1955. Only about two miles from the University of Rhode Island campus, the Sickler “compound” on Hundred Acre Pond in Kingston was the favorite meeting spot for the family from the 1950s through the mid-80s. Parke also loved the ocean and the family made numerous trips to Block Island (Rhode Island), Cape Cod and many beaches on the North Shore area. The family also loved other locations they lived throughout the years especially in Topsfield, Mass., Greenfield, Mass., LaGrange, Ga., as well as Brevard, N.C.

In addition, Parke loved to take his family to Fenway Park for Boston Red Sox games, including a number of games in the 1967 Impossible Dream World Series season, Boston Bruins hockey games at The Boston Garden when they won two Stanley Cups (1970, 1972) as well as multiple trips to The Garden for the Ringling Bros. Barnum & Bailey Circus. Parke and Bernie also loved to vacation in Bermuda and enjoyed multiple trips through the years while the grandparents, Parke C. Sickler and Eleanor, as well as Bernie’s parents, Roger W. Brown and Mildred A. Brown, had their loving hands full with the care of the four children born in the 1952-1962 decade.

Following his MBA graduation from Tuck Business School in 1954, he began a four-decade long corporate and business management career spanning across the USA. His first job in 1954 was with the Campbell Soup Co. in Camden, NJ, Chicago and Sacramento, CA (1954-1960); Elliott Industries in Cambridge, Mass. (1960-62); USM Corporation in Boston and Lynn, Mass.; as well as Henniker, N.H. (1962-72). Parke then worked in management for Erving Paper Mills in Erving, Mass.; Brattleboro, Vt.; and plant manager in LaGrange, Ga. (1972-87). After Erving was acquired by Georgia-Pacific Corporation (GPC) in 1987, Parke worked for GPC until his retirement in June 1991. During his time with the USM  Corporation, Parke was chosen by his company to attend the Harvard Business School Advanced Management Program in 1968. Early in his business career, Parke adopted the motto, “quiet confidence” from a mentor while he worked at Campbell Soup. He applied this motto throughout his career. In addition, Parke’s definition of the characteristics of leadership and his “pathway through life” include: 1) wisdom; 2) honesty; 3) courage; and 4) compassion. He lived his life to these principles and is forever loved by all for them. He was a wonderful mentor to his children and made a profound and positive impact on their lives. We are forever grateful to be blessed by his presence. 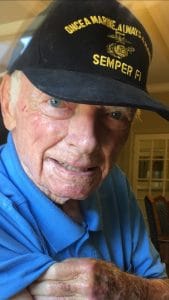 Following his retirement, Parke and Bernie built a home in the beautiful North Carolina mountain community of Brevard, N.C., where they happily called home from 1993 to 2020 prior to his move to Hope Center Memory Care in Fayetteville, Ga. in 2020. Members of the First United Methodist Church of Brevard, he and Bernie were active members and both gave of their free time for many volunteer projects through the years. He served as a mediator and board member of the Transylvania County Dispute Center, now known as The Mediation Center for Dialogue. Parke also served a term as president of the Deer Lake Village Homeowners Association. In addition, he volunteered and was very popular with the young children as a school crossing guard with The Brevard Police Department. While living in Brevard, he had a thrill on April 24, 1993 when he earned a hole-in-one on the par-3 third hole at the Sherwood Forest Golf Club in Cedar Mountain, N.C. while playing with his son, Scott. Parke and Bernie made many wonderful friendships through the years with those in the Brevard community, including great fellowship with a large group in the morning bakery gang. Parke also loved his time at the College Walk Assisted Living community in Brevard (2014-2020).

The Sickler family is thankful and blessed that Parke received loving care throughout his eightmonth stay from the staff at Hope Center Memory Care as well as Southern Grace Hospice professionals. At the HCMC facility, his favorite treat was a large Dairy Queen chocolate shake brought every visit from his son, Scott. He loved to proudly sport his Dartmouth hat and shirts as well as his U.S. Marine Corps hat, Semper Fi!

The Sickler family is being assisted by Georgia Cremation, 1086 Hwy 54 West, Fayetteville. Messages of condolence may be left at www.GeorgiaCremation.com. 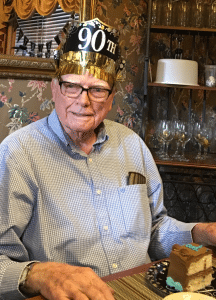 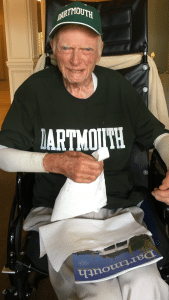 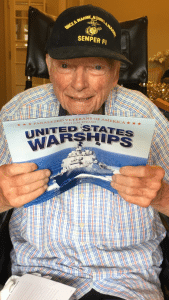 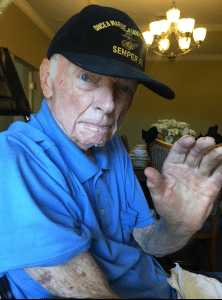 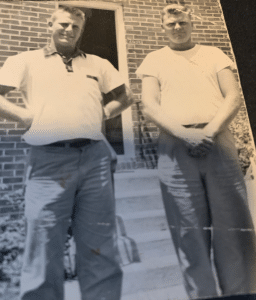 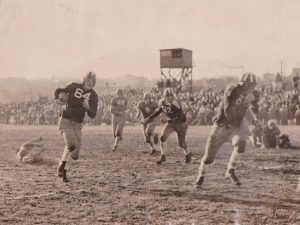 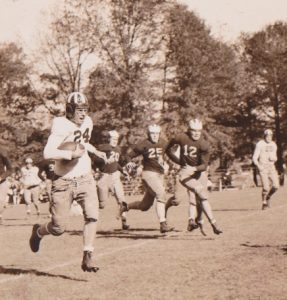 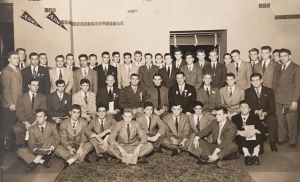 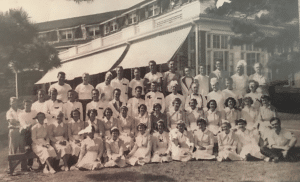 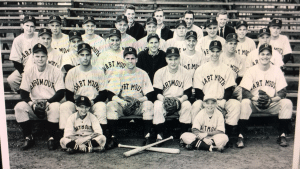 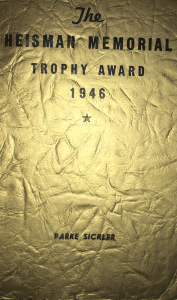 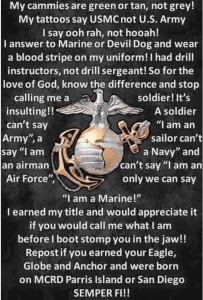