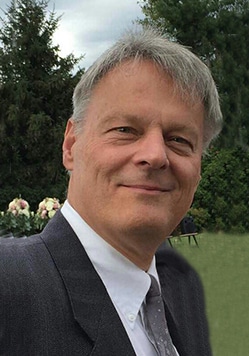 In his life of 59 years, Bernhard mastered many things.  Asa young student in High School and College, he yearly was on the Honor Roll and Dean List.  After earning his degree from Mohawk College and McMaster University, Bernhard began a brilliant career in Installation, Engineering and Capital Sales.  (Koering, Combustion Engineering, Sprout Bauer, Sunds Defibrator, Mesto, Valmet).  He traveled extensively and enjoyed every aspect of his remarkable accomplishments.  His exceptional intelligence, his commitment to surpassing expectations, his attention to detail and accuracy, his ability to network and his team outlook were legendary in all his endeavors.

Bernhard embraced and championed a spirit of kindness, loyalty, generosity, brotherhood, simplicity, humility, and harmony – he was a bridge builder and a peace maker.

His love of team sports as a College Volleyball team layer continued as he avidly followed his favorite football, hockey, baseball and soccer teams.  His passion for NASCAR, Indy and Formula 1 races, from his early childhood were his favorite.  He was a loyal fan of Michael Schumacher and Lewis Hamilton.  Bernhard epitomized core Christian values.  He was a caring, loving husband, father, father-in-law, grandfather, son, brother, friend, mentor, business manager.

Preceded in death by his father, Manfred Platz, who died December 24, 2015, Bernhard will be dearly missed by his wife of 25 years, Marguerite, his mother, Hilde Marie, his son, Jeffrey, his step-sons, Patrick and Tim LaFlamme, his daughters-in-law, Jen McConkey, Heather LaFlamme, Christine Kim, his grandchildren, Hailey, Sami, Isabella, Christian, Justine, Kaylee, his sister, Evelyne MacMillan(John), his brother-in-law, Jean-Pierre Camus (Sally), his nieces and nephews, all his friends and neighbors.