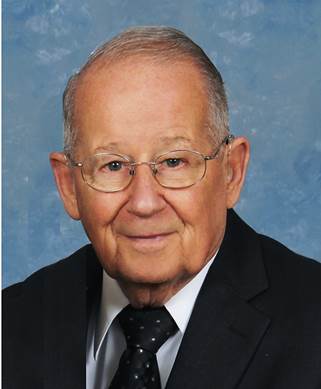 Robert Joseph Owen, age 89 of Peachtree City, passed away quietly on January 3, 2019 at the Georgia War Veteran’s Nursing Home in Augusta. He was born November 17, 1929 to coal-miner father, Floyd and mother, Rossie Burr in Palmer, TN.  In October of 2015, he suffered a fall at home that left him completely disabled and bed-ridden.  Prior to that event, he was enjoying retirement from the Federal Aviation Administration where he began as an air traffic controller and later moved into management at the Atlanta Regional Office in College Park and the Air Traffic Control Center in Hampton. During his 41 year career, he was also assigned to the Jacksonville, FL Air Traffic Control Center, followed by a transfer to the Area Office Air Traffic Control Center in the Panama Canal Zone.

Known as Bob, Dad, Papa, Bobbie Joe, Rjo, and even St. Joe by sister, Rosie, he was a family man who preferred being at home on the weekends over golfing with friends. While in Jacksonville and Panama, he was involved in Little League Baseball, coaching all-star teams from 1961 to 1969.  Once back in the states, while residing in College Park with his first wife and their two children, he served as Assistant Scout Master as son John was earning Explorer Scout status. He also had a life-long love of fishing which he shared with all of his children.

Bob loved his country and was proud to join the Navy in 1948, immediately after high school graduation from Baxter Seminary, a small Methodist school in Baxter, TN.  He was assigned to the USS Rupertus DD-851 and served during the Korean War.  Following his Navy service, he attended Tennessee Tech and graduated with a BS in Education.

He was passionate about being of service to others, which included finding ways to make folks laugh. He moved to Peachtree City in 1977 upon marrying his second wife, Judy. If you ever met him, you were probably asked to look at his “Pride and Joy.”  Always handy in his wallet was a picture of a bottle of Pride furniture polish beside a bottle of Joy dishwashing liquid!  He frequently entertained patrons of “Mimi’s Fine Food” with various additions to the humorous sayings and interesting pictures displayed on the walls.  Mimi’s was his favorite hangout for breakfast and he always made it a point to tip both server and kitchen staff.

In the 80’s, Bob was involved in the inception and organization of the Peachtree City Police Auxiliary where he served as an Auxiliary Policeman for several years.  During that time he was instrumental in starting and leading Explorer Post 999. The local Rotary Club awarded him a Certificate of Appreciation in honor of his contribution to safety in the community as a leader of the Explorer Post 999. He also received a Certificate of Commendation from the City of Peachtree city for outstanding volunteer service for 1988. Bob was a charter member of the Riverdale Civitan Club and a Junior Achievement leader at Forest Park Senior High School.

Once retired in 1993, Bob immediately got more involved in the community and worked part-time at the Peachtree Conference Center as an airport shuttle driver.  Later he was a courier for Community Capital Bank and The Bank of Georgia.  He joined VFW Post 9949, American Legion Post 50, the Commemorative Air Force “Dixie Wing” Chapter, and remained an active member of all three.  Bob taught Defensive Driving under the direction of the Fayette County Marshall’s Office. He was also a Red Cross Volunteer and trained for Disaster Team Leadership. He was a participant in the first C.E.R.T. class and actively recruited for future classes. He always kept a light-reflective vest along with other supplies in his truck allowing him to safely assist with traffic control whenever there was a need.  He frequently volunteered his free golf cart shuttle service as well.

He loved people, especially children, and is fondly remembered at his church for always having sugar-free candy for the kids and entertaining them with his laser light.  Bob volunteered to usher at several Atlanta venues and was a constant among the ushers at Christ Our Shepherd Lutheran Church where he was actively involved since 1980. He also initiated and led a clowning ministry for the church youth for several years.

Bob raised two families and is survived by his wife, Judy Cameron Owen; children John Owen and Jill Owen Cline; step-children Holly Winters and Brodie Ballard; nine grandchildren (#10 due in April); one step-grandchild; three great grandchildren; and his beloved dog, Muffin. One of six Owen children, he is survived by two sisters, Mary Reynolds and Rosie Little both of middle Tennessee, along with numerous nephews and nieces. He is preceded in death by his first wife, a son Robert, Jr, and daughter, Melinda Owen James.

A Celebration of Bob’s life will be held at Christ Our Shepherd Lutheran Church in Peachtree City at 3:00 PM on Friday, January 18, 2019 with Pastors Miriam Beecher and Fritz Weise officiating.  Visitation will be held one hour before the service in the Church Narthex.  A reception will be held in the Church Fellowship Hall following a brief interment in the Columbarium.

In lieu of flowers, the family requests donations to the American Legion, VFW or any other organization that supports our veterans. Messages of condolence may be left at www.GeorgiaCremation.com.