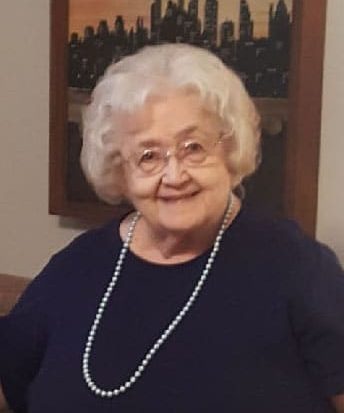 Shirley Jeannine Henkel, 85, of Fayetteville, GA passed into the presence of her Lord and Savior, Jesus Christ, on Friday, January 15, 2021.

She was born to the late Lawrence and Edna (Howard) Jack on September 27, 1935 in Morgantown, WV. Following graduation from Morgantown High School in 1953, Shirley attended Nyack College in Nyack, NY. It was there that she met Homer Henkel at the freshman reception, and he says it was love at first sight. They were married July 7, 1956 and celebrated their 64th anniversary last summer.

Shirley was a much-loved only child who had many aunts, uncles, and cousins with whom she enjoyed close and lasting friendships. She and her dad shared a love of college football and enthusiastically attended games at West Virginia University’s Mountaineers stadium in Morgantown. She loved music and had a beautiful voice with a broad vocal range. She sang in a women’s trio during her high school and college years, and as a pastor’s wife sang many solos for worship services and weddings, as well as duets with Homer, and in quartets with other couples.

Before and during college she worked as a switchboard operator for the telephone company in Morgantown and for a hospital in Nyack. Later, she also worked for a time in the Admissions Office at West Virginia University, and later for the Pennsylvania Department of Employment. In all seasons of life, Shirley was a supportive pastor’s wife who genuinely loved people, prayed for them, and cared for them as family. She served alongside Homer through 45 years of pastoral ministry in Pennsylvania, West Virginia and New York. Through the years she enjoyed directing Vacation Bible Schools, helping lead youth groups, women’s ministry programs, and she especially loved teaching Sunday School for special needs children. Shirley and Homer moved to Georgia in 2002 after he retired to be near their children and grandchildren. Shirley maintained a ministry of prayer and sending cards of encouragement until the time of her passing.

Shirley had a brilliant memory often recalling dates and events in great detail many years later. She loved to laugh and delighted to hear and tell stories about the activities, adventures, and antics of her grandchildren and great-grandchildren. Her most cherished roles were undoubtedly that of loving wife, mother, grandmother and great-grandmother. Her legacy of unconditional love, faith, and prayerful devotion will always be cherished by her family and friends.

A memorial service will be held at 11:00 AM on Saturday, February 13, 2021 at Carriage Lane Presbyterian Church on the corner of Highway 54 and Carriage Lane in Peachtree City, Georgia. It is requested that all who attend wear a mask, maintain social distance, and follow safety protocols. In lieu of flowers, those planning an expression of sympathy in the form of a donation may wish to consider a contribution to Gideons International at https://www.gideons.org/donate or to Carriage Lane Presbyterian Church at https://rock-admin.carriagelanepres.com/shirley-henkel.

The Henkel family is being assisted by Georgia Cremation, 1086 Hwy 54 West, Fayetteville. Messages of condolence may be left at www.GeorgiaCremation.com.